Sometimes, this little blog of mine really gives me some “pinch me I’m dreaming, are you for real?!” moments. When an invite landed in my inbox from Carphone Warehouse for the new Samsung Galaxy S8 launch event, I was gobsmacked. For a little bit of history, I’ve always been an Android girl – NEVER an iPhone user – and have had a variety of handsets from Sony Xperias to HTC to the last two phones I’ve had, the Google Nexus 5 and 5X. I’d never had a Samsung, but I know how popular they are, and I’d seen some of the hype around the S8 and S8 Plus. Arriving at The Alchemist bar on Greek Street feeling very bedraggled after a not-so-awesome day at work, I was really excited to see what all the fuss is about. 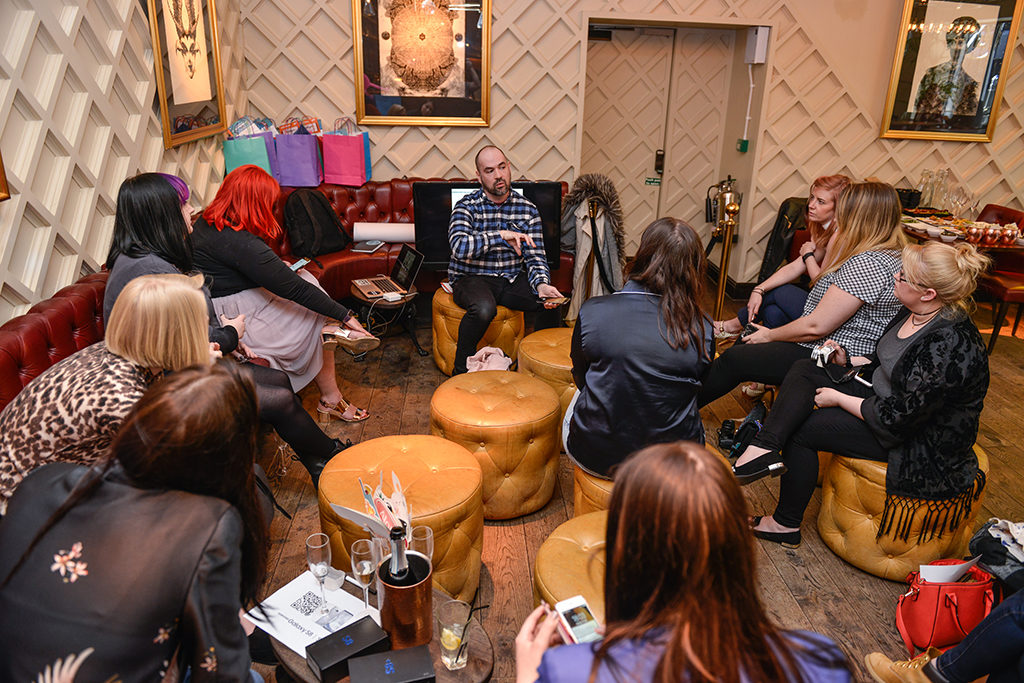 The evening started with a masterclass in photography with Richard Storrow, who talked us through some photography tips and tricks around framing, lighting, and editing our pictures. He also showed us a bunch of photographs he’d taken with the camera on the S8 Plus, which were all stunning. We started to get a sense for just how good the camera is, with a level of fine tuned control you’d be more likely to expect from a ‘proper’ camera. After our little lesson, we all took part in a photography challenge using the knowledge we’d been given by Richard, and either the S8 or the S8 Plus. A lot was at stake though, as one blogger would have the opportunity to take home the incredibly beautiful Galaxy S8. I looked up to see circles and spirals aplenty, looking to exploit the Golden Ratio in my shot. I knew I’d have to get down to floor level, but being on the floor in fancy bars is nothing new to me – I’ve been photographing my Blythe dolls for years and legit have no shame… 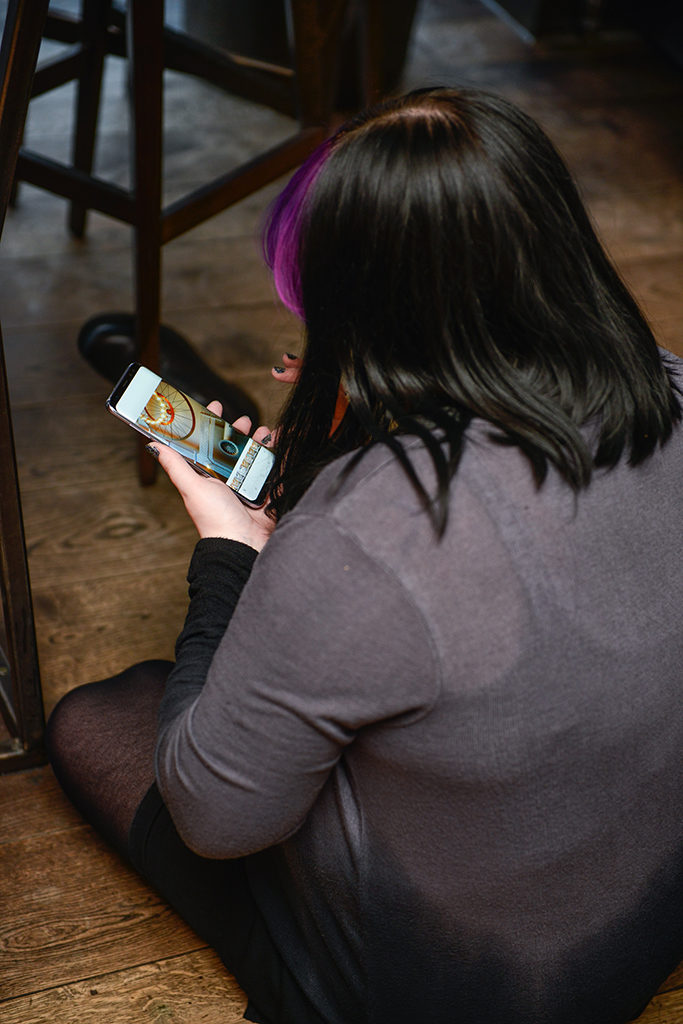 And here’s my attempt from the night – 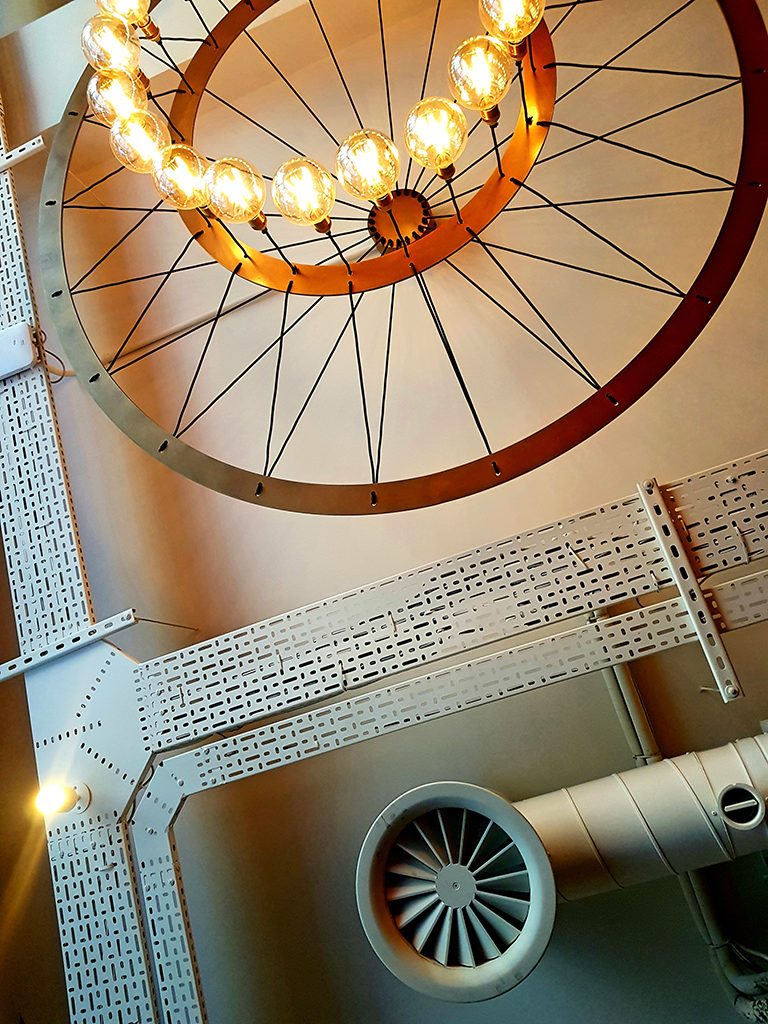 … and erm, yeah. I took home a Galaxy S8! My photograph was chosen and boom – new toy! I literally don’t have words for how happy I was/am about this. My Nexus had been dying a death and acting laggy and awful for a couple of months, and I was genuinely starting to panic over which phone I’d go for next (as Google have retired Nexus in favour of Pixel, which hasn’t spoken to me, you know?) Having the decision effectively made for me was ace, haha!

Having had a chance to play around with the phone for a little over a week now, I want to offer up some of my initial thoughts. First off, the design of the phone is just beyond stunning. The screen is so vibrant and big, and the curved glass feels so good in your hand. Watching videos on that huge screen is so satisfying. It’s so beautiful that I’ll admit, I was a little scared of it initially, and didn’t take it out of the house until I had a case for it. Cute cases are a little bit hard to find right now as the phone has just launched, but I’ve gone with an official Samsung LED case. It’s literal witchcraft guys, some magic with NFC means that the rather plain and unassuming case has secret sneaky LEDs that light up to alert you to notifications and so on. You can even answer/dismiss notifications on the case. Burn the witch! Of course, these two pictures were taken on my Nexus 5X, and will likely be the last owing to the amazing camera on the S8… 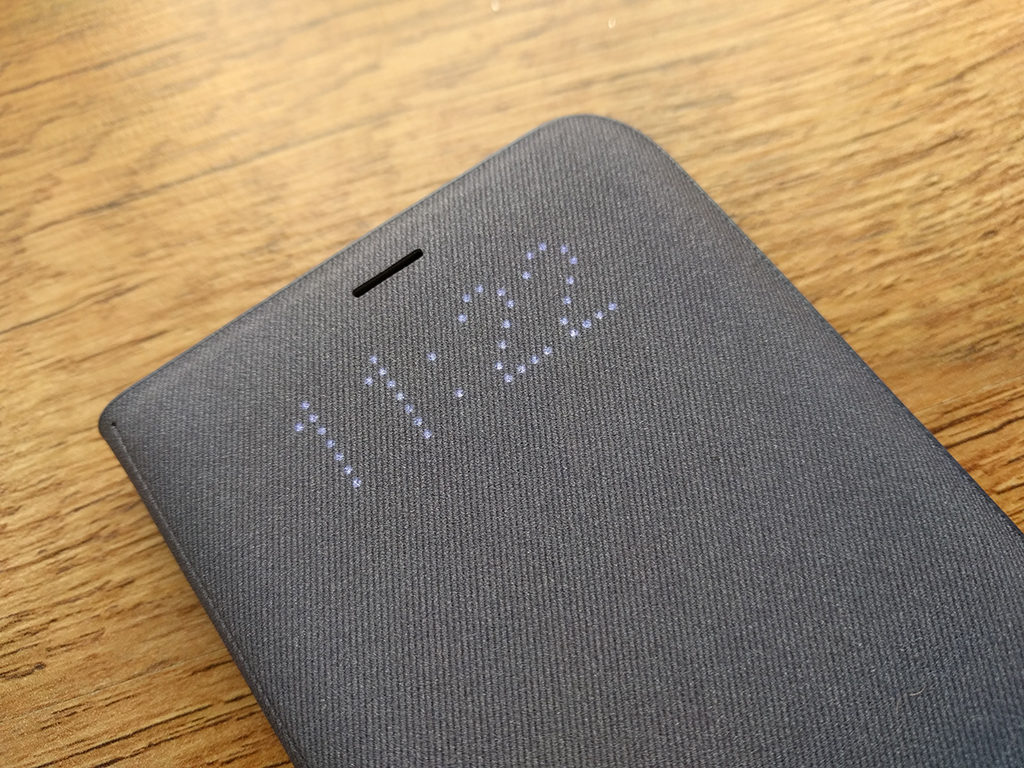 Next, and most importantly for me (and I guess most bloggers) the camera is AMAZING. I rely on my phone camera a lot of the time, and as Richard told us on the night, the best camera is the one you have with you. I’ve been so busy with work (and house hunting…) that I haven’t had a chance to really see what it can do, but here’s a couple of quickies for now – 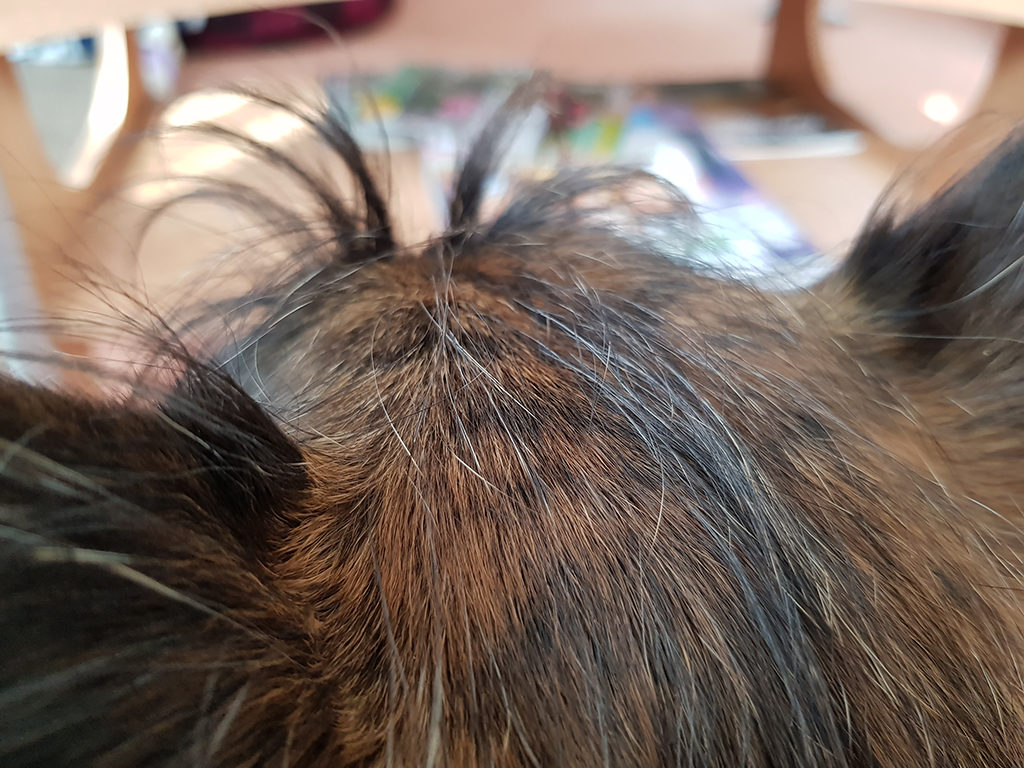 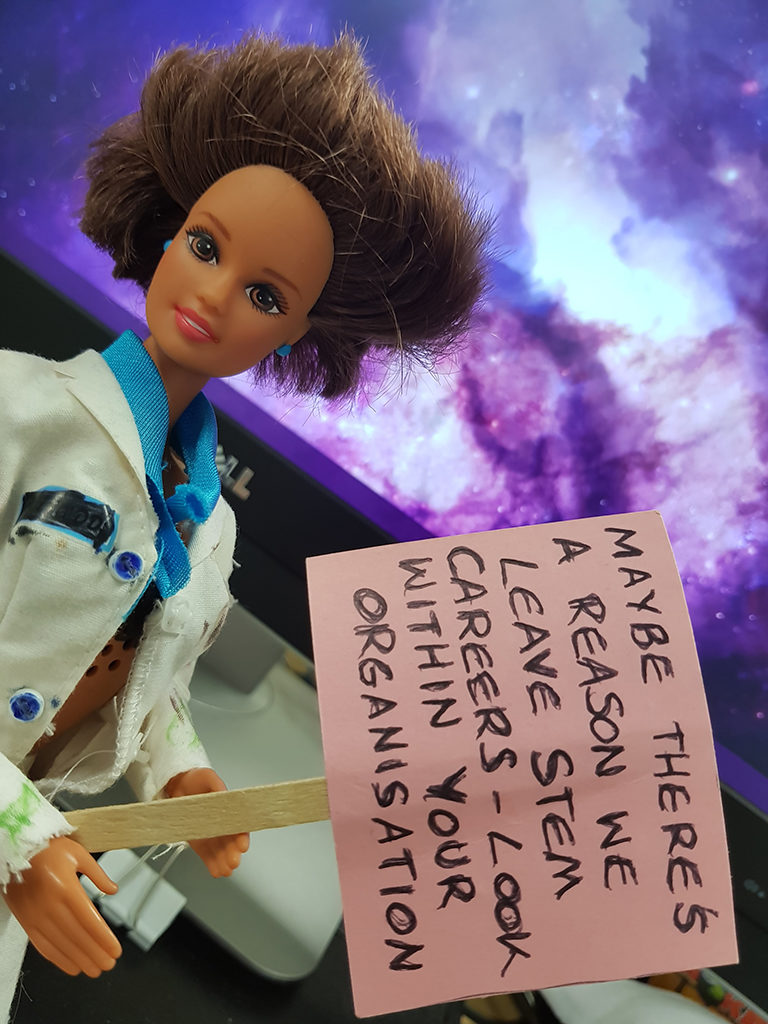 Craftivism protest Barbie lives on my desk at work, being angry at the lack of women in STEM fields. One thing she’s not angry about is how vibrant and lush the colours are on the S8 camera. 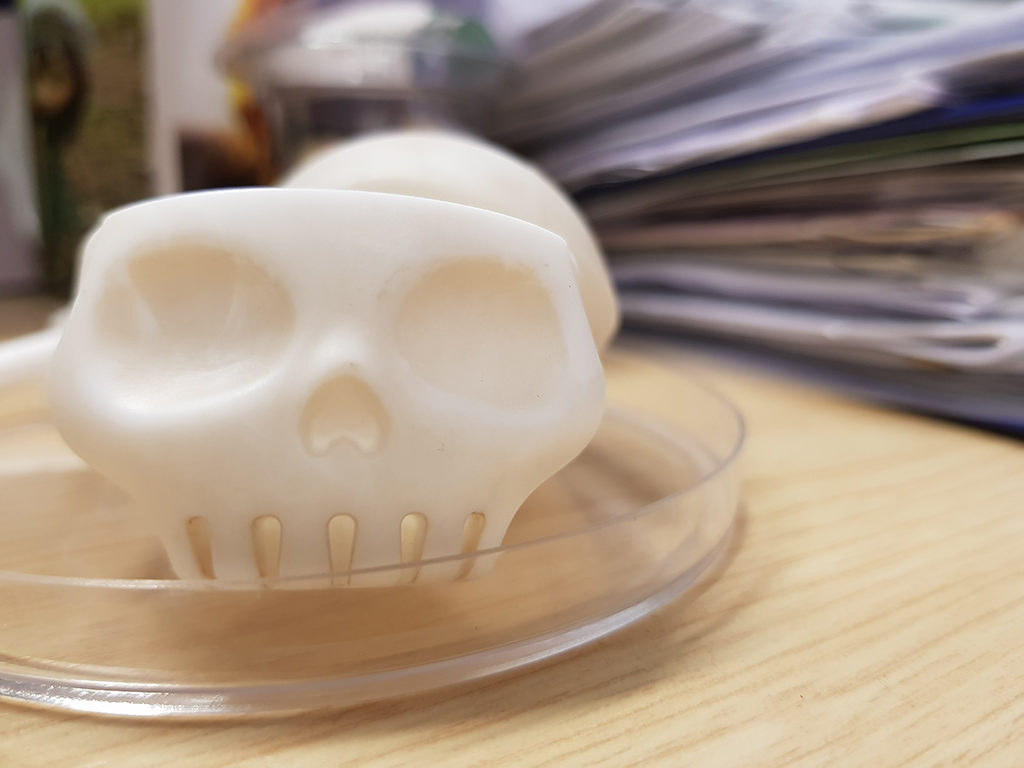 In addition to the very sensible and technical amazingness of the camera itself, there’s a bunch of neat extra features built in, for example, Snapchat style filters which apply ‘masks’ to faces, and great on board filter presets for editing quickly. There’s even a built in mode optimised for food photography – avocado toast never looked so good, hahaha… You can have as much or as little control as you like with this camera, and for that reason I can see this phone really appealing to bloggers. Sometimes you don’t want to drag a DSLR around with you!

There are a couple of little niggles with the phone, but I think they only bother me because I’m coming from several years of using Google Nexus phones which don’t come with a bunch of preloaded manufacturer stuff/bloatware. For instance, the Facebook app is preloaded on the S8 handset, and you can’t uninstall it – I don’t want it there, it’s taking up space, and it irritates me that I can’t just uninstall. The built in Samsung Bixby stuff (think Siri, Cortana, etc.) feels really forced and is unfinished for now, yet there’s a physical button on the handset to launch it. The fingerprint unlock sensor is in a bit of an awkward position, which makes it too easy to smudge the camera lens.

In the grand scheme of things, these are things that bug me personally, but a) I doubt they’d bother a lot of people, and b) I’m sure I’ll get used to some of the little intricacies of the Samsung layout. With Bixby, things might improve later in the year with updates. That said, I know that it’s never going to be a 100% smooth transition from one device to another, and the stunning hardware on the S8 more than makes up for my little grumbles.

Thank you SO MUCH to Carphone Warehouse, Epiphany Search, Jaywing PR, and Richard Storrow for an amazing night. I had so much fun, I learned a lot, and I’m really excited about getting to grips with the Samsung Galaxy S8. Is anyone else thinking about switching to an S8 or S8 Plus? If anyone has any cute case recommendations for me, I’d love to hear them!